The only way to steer the energy market away from Fossil fuels, like oil, coal and gas (CO2), is by combining cheap renewable energy with a cheap energy storage – the TEXEL battery is such solution. The battery reduces storage costs many times compared with Lithium-Ion in some applications. In combination with cheap and renewable wind or solar energy, the technology competes head to head with fossil fuels – and not only in terms of cost but as well in terms of distribution, 24 hours a day, 7 days a week, 365 days per year.

FROM SOLAR ENERGY TO ENERGY STORAGE

In September 2018, the TEXEL battery technology was appointed “The success story beyond Lithium-Ion” at the Energy Storage summit at SLAC / Stanford in Silicon Valley. The technology was proven to be many times more cost effective than Lithium-Ion in some applications, no degradation, no rare earth, 100% recyclable and high energy density. The TEXEL battery was now becoming a competitor to Lithium-Ion in applications where larger amount of storage is needed, also i combination with PV and wind. United Sun Systems became TEXEL with 100% focus on Energy Storage.

CO-OPERATION WITH THE US DOE

After years of research and evaluation of all different thermal storage solutions existing, TEXEL initiated negotiations with US Department of Energy’s (DOE) and Savannah River National Laboratory (SRNL), the laboratory behind the hydrogen bomb. The goal was to sign an exclusive license agreement to use the new “Metal hydride & Hydrogen” based patented thermochemical battery solution, which was a 100 percent match with TEXEL’s research and Stirling technology. In February 2018, and two American Presidents, the exclusive license agreement with the US DOE’s SRNL was finally signed. 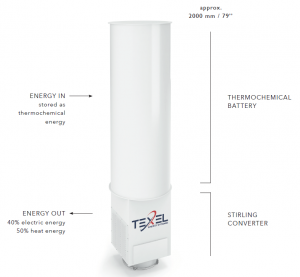 His company got sole right of battery technology when Trump focused on coal and oil again. Lars Jacobsson is the CEO who...