– growing faster than any market before

THE WORLD STEERS AWAY FROM FOSSIL FUEL

Low carbon electricity is a central part in tackling climate change. Electricity generation is responsible for about 30 percent of the global greenhouse gas emissions every year.

The TEXEL battery technology provides a unique possibility to steer away from fossil fuels. This new battery technology in combination with existing solar and wind installations does not only be-come cheaper, but will as well compete with exciting distribution of electricity 24/7/365.

RENEWABLE ENERGY AT A CRITICAL POINT

Excess supply of generated energy by solar and wind in the grid, on sunny, windy days, overpowers the electric grid with so much electricity that the price goes negative – in other words, operators of solar and wind plants must pay to get rid of the overproduced electricity. It has come to a critical point where adding more solar and wind power to the grids does not increase the renewable energy supply without an energy storage solution to match it.

California stands in the forefront as an early adopter of the development of CO2-free generated electricity with legislation to archive a CO2-free electric grid in California by 2045, and in Los Angeles the goal is to generate 60 percent CO2-free renewable electricity already by 2025.

California’s decisions to become CO2-free were made at the same time as their development of wind and solar energy had reached its critical point, where it is impossible to add more wind and solar power to the grid without adding an energy storage solution at the same time. The investment needed for energy storage is calculated to approximately 350 billion US dollar, in California alone.

Among the technologies to make this transformation possible are pumped hydro, compressed air, concentrated solar towers and Lithium-Ion batteries. The TEXEL battery technology is not only cost-competitive compared to these other solutions, it is also scalable to decentralized grid solutions, microgrids, as well as independent residential.

The rest of the world is following in California’s footsteps. The European Union is expected to release their goals of becoming CO2-free by 2050 in accordance with IPCC (UN’s The Intergovernmental Panel on Climate Change) global goal of reaching ‘net zero’ CO2 emissions by 2050.
In 2018 Australia was the first country to take a large step by installing a 129MWh Tesla produced Lithium-Ion battery installation, by that time the largest battery park in the world. Later that same year Southern California Edison ordered a 195MWh Lithium-Ion installation to replace a gas plant. Germany is also getting closer to the same critical point, and will not be able to install more wind and solar without including an energy storage solution. This is happening even though Litium-Ion batteries are up to 90% more costly than the TEXEL technology.

According to Bloomberg New Energy Finance (BNEF) the global energy storage market, excluding pumped hydro, is expected to attract 1.2 trillion dollar in investment from now until 2040.

– the TEXEL battery a versatile solution

The battery and energy storage market has many segments and applications. From the smallest battery devices to huge energy storage parks to store MWh grid size energy.

TEXEL is focusing on the large-scale energy storage market. TEXEL’s large-scale battery modules combined with the Gas Hybrid takes the technology far beyond any existing battery technologies by providing no need of backup systems, and creates a secured grid.

The TEXEL battery is the perfect solution to create fully independent residential storage and energy production, or to secure energy production 24/7/365 in a microgrid. Connecting many residential storage units with AI, creates a dynamic microgrid or grid. By using the TEXEL battery in this application the overall energy efficiency is increased to 90 percent by using the 50 percent heat energy in combination with the 40 percent electric energy. 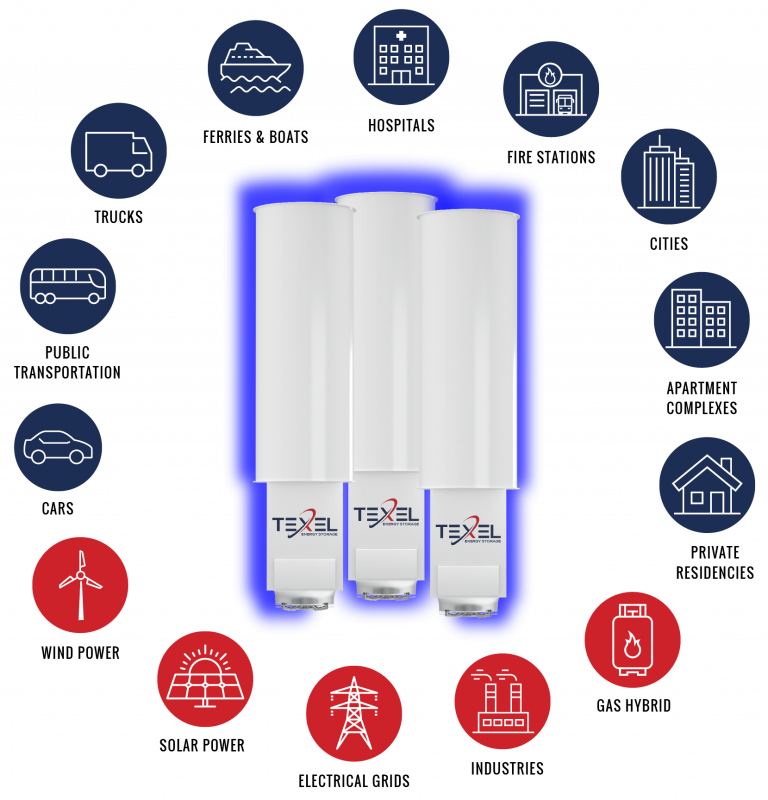 The high energy density of the TEXEL battery is opening up for the Electric Vehicles (EV) market. This market is growing fast and TEXEL battery could in the future be used to reduce battery costs for cars, trucks, buses, trains, ferries, etc. TEXEL has been approached by the EV market and is considering this segment as a future possibility.

– the unbalance of peak demand and peak supply

RENEWABLE ENERGY AT A CRITICAL POINT

Excess supply of solar and wind generated energy in the grid, on sunny, windy days, over powers the systems with so much energy that the price goes negative – in other words, operators of large solar and wind plants must pay to produce electricity. It has come to critical point where adding more solar and wind power to the grids do not increase the renewable energy supply without energy storage solutions along side, in some markets.

A STORAGE SOLUTION MOVES ENERGY FROM PRODUCTION TO DEMAND

Producing energy with solar technologies like Photo Voltaic (PV) creates huge production mid-day when the sun is shining, which pushes the price of energy down because of peak supply – pro-duction greater than demand. To avoid power cuts from cloud interruptions, energy is produced in the grid at the same time with with oil, gas & coal, which pushes down prices down as well.

Bringing more solar produced energy to the market creates a risk of over-generation, to be able to supply this “over-generated” en-ergy during peak production a battery storage solution is a neces-sity. Peak demand issues, need of energy after sunset, is pushing the demand of energy storage. 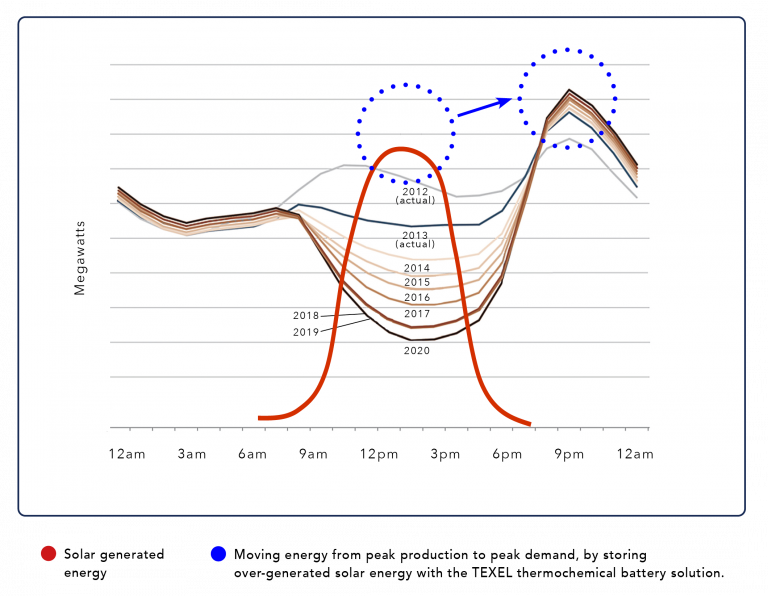